There are all kinds of stars in the sky. You can even see them with your naked eye if you know which ones to look for. But there’s a special kind of star that seems to move from one place to another: a shooting star. These falling stars are just tiny specks of dust from space burning up in the atmosphere. You can see them at night, but they’re easier to spot in the daytime too if they are big enough. 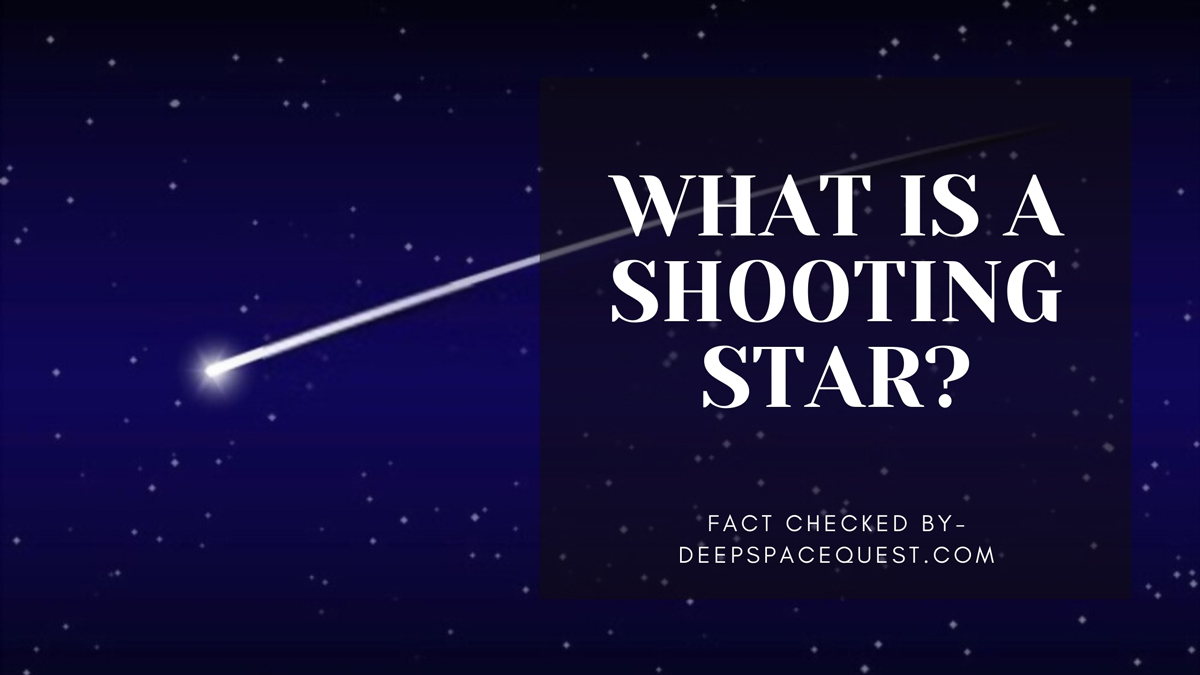 What are shooting stars?

As mentioned in NASA, all of the meteors we see streaking across the sky are not, in fact, stars. They are tiny pieces of rock or metal from space that are burning up as they enter our atmosphere. As the meteor moves through Earth’s atmosphere it is going incredibly fast and it’s burning up. As it burns it produces light and this is what we see as a meteor. Most meteors are very small, some as tiny as a dust grain of sand, so they disintegrate in the air. Larger ones that reach the Earth’s surface are called meteorites and are rare. When Earth encounters many meteoroids at once, we call it a meteor shower.

What causes a shooting star?

Whether an object breaks apart depends on its composition, speed, and angle of entry. A faster bright meteor at an oblique angle (slanting rather than straight-on) suffers greater stress. Meteors made of iron withstand stress better than those of stone. Even an iron meteor will usually break up as the atmosphere becomes denser, around 5 to 7 miles up.

Is seeing a shooting star good?

Some people believe that seeing a shooting star is a good omen. Others believe that they symbolize death or destruction. Which is correct? When it comes to the bright objects that streak across the sky, there are no hard and fast rules. Some people view them as a good omen, some as a bad one, and some think they have no meaning at all. What is the truth?

It’s a common astronomical event, and there is a certain time you are likely to see more meteors per hour than other times of the year. If you watch and wait, you might see a lot of them, and it will not make you much luckier than you were before. Also, if you want to feel lucky to watch such a magnificent event, then definitely you are. And, whether it brings good luck or not, we will not stop watching this beauty, right?

What is the difference between a shooting star and a comet?

You might think the difference between shooting stars and comets is obvious—comets are formed from ice and snow, while shooting stars are made of gas and dust. But that’s just a superficial impression. In reality, there are important differences between these two celestial objects.

A comet is a tiny entity that orbits the Sun and is mostly made of ice and rock. When the comet approaches the Sun, its frozen gases sublimate, forming an “atmosphere” that surrounds them. They’re more generally referred to as “tails.”

A shooting star is a meteoroid that has entered Earth’s atmosphere and is heating up as a result of air friction. A meteoroid, then, is a small non-planetary rock (less than one meter in diameter) that was left behind from the formation of the Solar System. Meteoroids occasionally collide with Earth’s orbit and are drawn in by gravity.

The dust and rocks that cause meteor showers come primarily from the Earth passing through the debris stream left behind by a comet as it orbits the Sun. Usually, the Earth’s orbit and the comet’s orbit are slightly tilted relative to one another. So the paths only intersect on one side!

How long can you see a shooting star for?

Well, it depends on the size of the meteoroid. Most of them are very small and have very small life spans until they burn up to the ashes. Depending on the meteor’s size, it might burn within a blink of an eye for a couple of seconds.

What do you do if you see a shooting star?

Here’s a question we get asked all the time: “What do you do if you see a shooting star?” The truth is most of us never see one, although the rare few do. What they look like is like an enormous ball of fire streaking across the night sky. However, even though we’re never lucky enough to witness it, we can still enjoy the experience. One other thing you can do, make a wish to see another one!

How do I know if I saw a shooting star?

Do wishes come true when you see a shooting star?

Every year, a lucky few will catch a shooting star. And when they do, they feel an intense sense of wonder, wonder that the vastness of the universe can bring such joy to a single life. A shooting star is a signal, a hope, a reminder to take time to be grateful for what you have.

What are the chances of seeing a shooting star in your life?

Once you’re out in the night sky, the stars are a beautiful sight to behold. From the largest to the smallest, they are all around us, silently and serenely shining. But how many of us have looked up at the night sky and wondered — “What are the chances of seeing a shooting star in my life?”

While there are stray bits of stuff hitting Earth from all directions, there also are regularly timed “meteor showers” when astronomers can make better predictions about how many meteors will hit the Earth, and from what direction. The key difference is that meteor showers occur when the Earth plows into the star state trail of particles left behind by a comet or asteroid. Depending on where the star state trail of dust particles falls in a particular year, meteor showers can be more or less intense.

Most meteor showers are best viewed in the pre-dawn hours when the part of Earth you are standing on is facing the direction of Earth’s orbit. It’s like bugs hitting a car’s windshield. In the late evening hours, on the other hand, the meteors are less frequent, loosely akin to bugs hitting a car’s rear bumper.