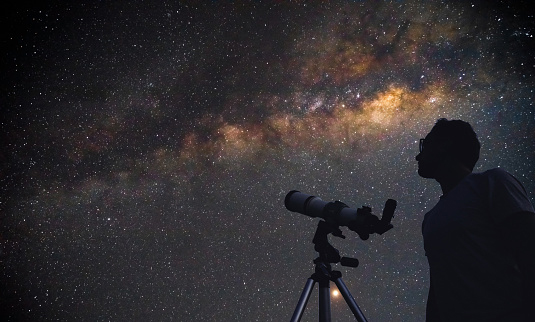 All of us love to see the blue-white color sky in the day or the twilight. The night sky with fainter stars, moon, and other galaxies make us more intrigued to see them closely and clearly. Our curious mind wants to explore the heavenly view of the sky. But to a man with naked eyes, it is impossible.

Telescopes is an optical instrument and have been used for centuries by astronomers looking for new stars or other astronomical objects or get to know a specific celestial object, and also for people fascinated by space.

Science has introduced a great instrument to us. With this device, the dull stars, planets will be bigger and brighter for observers. Do you know about telescopes? What is its history? Which one would be compatible with you? It should be tricky to pick one among the numerous telescopes with different designs and functions. Let’s read the whole article to know about your desired telescope.

In the astronomy world, you are unable to discover the twinkle stars without a telescope undoubtedly. If you want to be an owner of a telescope, you must know all about the telescopes. This knowledge might help you to choose the right one for sure.

A telescope is an instrument that makes it possible to observe distant celestial objects. It is an arrangement of lenses; the curved mirror is capable of collecting the rays of light, focusing, and magnifying the images. The more powerful lens or mirror means the more powerful telescope.

The History of Telescope

In 1609, Galileo Galilei started the improvement of the design and performance of his invented telescope. Galileo’s telescope could magnify the image up to 20 times. Later, Johannes Kepler invented another one with a convex objective lens with an eyepiece lens. An astronomer Christiaan Huygens designed a powerful telescope with a compound eyepieces lens in 1655.

William Herschel designed the giant reflector telescope in 1789 in the United Kingdom. Lord Rosse used the giant telescope for many years to study nebulae. He is the first person who observed the spiral arms of this M51 nebula.

NASA and the ESA worked together to develop the Hubble Space telescope in 1990. It could provide bright images of these stars and galaxies. It was the largest and most flexible telescope.

After that, in March 2018, NASA launched the James Webb Space Telescope replacing the Hubble telescope.

If you want to know more about the history. Please read this wiki page about the History of the telescope.

A telescope is an instrument that gathers light, mainly from the visible part of the electromagnetic spectrum, using a large mirror to reflect the light to a focal point. For the very basic, telescopes are designed with two mirrors and a lens. The first mirror creates an image of the object from the outside world, which is then reflected by the second mirror towards a small hole in one end of a long tube. The lens is placed at this end of the tube, which magnifies what we see.

In order for these telescopes to work, they must be able to pick up light from distant objects and bring it to focus. There are two main types of the telescope – reflecting telescopes use two mirrors, while refractors use a lens as their main optics component.

The optical telescope is an instrument that collects light and brings it to a focus or a point of convergence. There are many different kinds of telescopes. They can be categorized by their optical configuration, the purpose for which they are built, or their use.

This is the oldest type of telescope and was invented by Galileo. It uses two lenses to collect light and bring it to a focus. By using a refracting telescope, you can track the fainter stars, the moon for a longer duration. The drawback of this type is that a bright object like the moon can produce different color fringes or chromatic aberration around the object due to the same lenses for different wavelengths.

This telescope uses a parabolic mirror to focus the light on an image at the eyepiece. You will see the astronomical objects without any spherical aberration because the mirror carries the wavelengths of light at the same point to focus. The eyepiece is present at the top of the telescope tube. The mirror is almost equal to the three or more lenses used in refractors and is preferable for newbies or professionals. The optical instrument is also known as the Newtonian telescope as Newton developed this.

A catadioptric telescope is a combination of mirrors and lens to focus and magnify the images. The telescope uses the lens known as the corrector plate at the entrance, and the primary mirror is on the other side of the tube. The corrector plate acts as the transparent mount for the secondary mirror which focuses the image into the eyepieces. Schmidt-Cassegrain and Maksutov are the most common types of telescope for an amateur.

There are some other kinds of telescopes to watch deep-sky objects like radio telescopes, infrared telescopes, and gamma-ray telescopes.

Radio waves are electromagnetic waves and they emanate from an object. Radio telescopes have been in use since the 1930s for research. They work on the same principles as a normal optical telescope, but they use radio waves instead of light. Radio telescopes are used for many purposes: from tracking asteroids to monitoring weather, to detecting fast-moving black holes that don’t emit any radiation themselves.

Infrared telescopes gather and study light in the infrared spectrum. They are used for a wide variety of purposes, including astronomy and military surveillance.

Infrared telescopes are very different from our traditional optical telescopes because they gather light that is not visible to the human eye. This is also why infrared telescopes can see stars and galaxies that can’t be seen by our eyes, like clouds of gas and dust in space.

The technology was first developed by astronomer Dr. James Ewen Davidson, who first proposed using this method to observe faraway galaxies in 1949. He patented his idea in 1956 but couldn’t find funding for his research until 1962 when he was awarded a grant from the National Science Foundation (NSF).

Gamma-ray telescopes are space-based devices that detect gamma rays, the most energetic form of light. They are used to study the structure of atomic nuclei, and they can also be used to observe processes that occur in stars and galaxies.

The gamma-ray wavelength is typically less than 10 picometers in length, compared to visible light which is around 400 picometers.

The detection process for these telescopes includes directing the telescope at a specific patch of sky and waiting for a signal to return at peak intensity. The telescope will detect this signal and analyze it before returning all data back to Earth for analysis.

Gamma-ray telescopes are used to study the universe in areas where visible light is blocked by the Earth’s atmosphere. They are also used to observe solar flares, gamma-ray bursts, and supernova explosions.

An X-ray telescope is a space-borne instrument that detects and observes X-rays from high-energy sources such as supernovae, neutron stars, and black holes.

X-rays are absorbed by the Earth’s atmosphere, so to study them we need to send them into space where they can be observed.

To do this, astronomers use specially designed satellites called x-ray observatories. These telescopes orbit the Earth in Low Earth Orbit (LEO) and detect x-rays with a variety of different instruments that can measure their energies and spectra.

The first satellite dedicated to studying x-rays from space was launched in 1962 at American Science and Engineering (AS&E).

Which is the best telescope to buy?

Astronomical instruments are a bit pricey. Telescopes can come in a variety of shapes and sizes, and it’s important to know which one will suit your needs best.

Telescopes can vary in size, weight, magnification, portability, and what you’re looking at. They can be hand-held or mounted on a stand. Telescopes for astronomy usually have bigger lenses than those used for terrestrial viewing.

Inexpensive telescopes or budget telescopes are mainly “refractors” and they use lenses to collect light from distant objects like planets, galaxies, and nebulae. These telescopes are usually made out of plastic or aluminum. They are portable enough that you could take them with you while camping or hiking to observe the night sky from almost anywhere outside city limits.

If you travel a lot and want to enjoy the scenic beauty of the night from a quiet place, you would prefer a portable telescope. They are also occasionally referred to as “travel telescopes”. This kind of telescope usually has the same aperture size or is slightly smaller than the other kinds of telescopes. They are also usually more compact and can be folded up into a small, easy-to-carry package. The main advantage of these telescopes is that they can be used easily by people who have no knowledge about using a telescope before. In the United States, a portable handheld telescope is a legal instrument and can be used on public land.

What is a good telescope for a beginner?

You are highly interested in the universe over the earth and want to observe star clusters, nebulas? As an amateur astronomer, you try a simple telescope to use. It will make your astronomy journey easier. There are several types of budget telescopes to choose from for beginners. Refracting telescopes are comparatively easy to use and require no adjustment difficulties. By this, you can see high-quality images other than the telescope. But if you are in budget limitation you can take the reflector telescope. Nowadays, the Dobsonian telescope is a great option for beginners that is always ready to set up.it offers you bright images with a larger aperture.

The Celestron Nexstar is a good platform with an affordable computer guided telescope. You can try this too. Finally, it depends on you what you are expecting, how you are capable of operating a telescope, and so on.

Which telescope is best for home use?

The better quality telescope facilitates a better image of the fainter sky object. So before you regret it, know all about the telescope. At the starting point, you can join the astronomy club and discuss with other people what they faced as a beginner.

Here, we tried a lot to make clear about this instrument. We hope you will make the right decision for a successful astronomy journey.

Telescopes have been around for hundreds of years and have helped scientists study astronomical objects and our universe. They offer a way to explore the world beyond what is possible with our own eyes.

They offer a way to study the sky and universe that we can’t see from just looking up at the sky. Telescopes are one of mankind’s greatest inventions, allowing us to explore everything in space in detail without ever leaving earth.